This is a very interesting article, although my personal belief as to why many cops don’t believe rape victims is because I think some are protecting their own way of life. Especially growing up in Texas, most of the encounters me and my friends have had with police officers have not been positive ones. The stereotypical gay-bashing, gun-toting, tobacco-dipping, self-entitled good ol’ boy bully is pretty much on-the-money. They are bullies. Entitled bullies with serious control issues, which is why they become police officers.

Of course I know that *all* police officers aren’t like this, so please don’t bombard me with the derailing NAMALT bullshit. I never said all were. I said the bulk of those I’ve dealt with either due to speeding tickets or in reporting rape, as well as my best friend from HS being beaten up by the local police and then put in jail for being gay, all in Texas. So glad I don’t live there anymore, although the police in other states haven’t proven to be much different.

Still, back to the article: agreed, the police units across the nation have not even had basic human psychology, let alone been educated on how severely traumatized victims react. So many times I’ve heard stories how the woman wasn’t upset enough, so it must not have happened. Or, she’s far too upset, she’s “hysterical,” so she much be putting it on. However a victim of sexualized or domestic violence acts, it’s never the right amount to be believed.

When Tom Tremblay started working for the police department of Burlington, Vt., 30 years ago, he discovered that many of his fellow cops rarely believed a rape victim. This was true time after time, in dozens of cases. Tremblay could see why they were doubtful once he started interviewing the victims himself. The victims, most of them women, often had trouble recalling an attack or couldn’t give a chronological account of it. Some expressed no emotion. Others smiled or laughed as they described being assaulted. “Unlike any other crime I responded to in my career, there was always this thought that a rape report was a false report,” says Tremblay, who was an investigator in Burlington’s sex crimes unit. “I was always bothered by the fact there was this shroud of doubt.”

Tremblay felt sex assault victims were telling the truth, and data supports his instincts: Only an estimated 2 to 8 percent of rape accusations are false, according to a survey of the literature published by the National Center for the Prosecution of Violence Against Women. Tremblay also knew the victims felt as if they were being treated like suspects, and it affected the choices they made. Surveyed about why they didn’t want to pursue a report, most victims said they worried that no one would believe them.

This is rape culture in action. It puts the burden of proving innocence on the victim, and from Steubenville, Ohio, to Notre Dame and beyond, we’ve seen it poison cases and destroy lives. But science is telling us that our suspicions of victims, the ones that seem like common sense, are flat-out baseless. A number of recent studies on neurobiology and trauma show that the ways in which the brain processes harrowing events accounts for victim behavior that often confounds cops, prosecutors, and juries.

These findings have led to a fundamental shift in the way experts who grasp the new science view the investigation of rape cases—and led them to a better method for interviewing victims. The problem is that the country’s 18,000 law enforcement agencies haven’t been converted. Or at least, most aren’t yet receiving the training to improve their own interview procedures. The exception, it turns out, is the military. Despite its many failings in sexual assault cases, it has actually been at the vanguard of translating the new research into practical tools for investigating rape.

In the past decade, neurobiology has evolved to explain why victims respond in ways that make it seem like they could be lying, even when they’re not. Using imaging technology, scientists can identify which parts of the brain are activated when a person contemplates a traumatic memory such as sexual assault. The brain’s prefrontal cortex—which is key to decision-making and memory—often becomes temporarily impaired. The amygdala, known to encode emotional experiences, begins to dominate, triggering the release of stress hormones and helping to record particular fragments of sensory information. Victims can also experience tonic immobility—a sensation of being frozen in place—or a dissociative state. These types of withdrawal result from extreme fear yet often make it appear as if the victim did not resist the assault.

The most common reaction to rape, or any horrific assault, it to freeze. Not to fight. To freeze. Any amount of research into PTSD will show you that. Now, when will this knowledge start getting out to the public and the police? It starts with you.

Olivia M. Grey lives in the cobwebbed corners of her mind writing paranormal romance with a Steampunk twist, like the Amazon Gothic Romance bestseller Avalon Revisited and it’s newly released sequel, of sorts, Avalon Revamped. Her short stories and poetry have been published in various magazines and anthologies, like SNM Horror Magazine and How the West Was Wicked. Ms. Grey also blogs and podcasts relationship essays covering such topics as alternative lifestyles, deepening intimacy, ending a relationship with love and respect, and other deliciously dark and decadent matters of the heart and soul.

Read more by O. M. Grey on her blog Caught in the Cogs, http://omgrey.wordpress.com

Disgusting “Don’t Be That Girl” Campaign in Calgary

Not much more I can say. This speaks for itself. 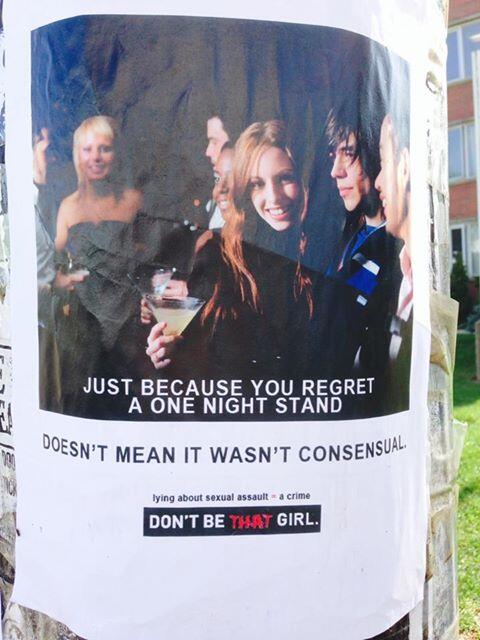 Calgary Communities Against Sexual Abuse (CCASA) also responded to the campaign with a blog post, writing: ”This poster which has mimicked itself after the “Don’t Be That Guy” Campaign has crossed a line by using incorrect information to try to make a point that is absolutely false, inaccurate and 100% incorrect.”

“I think what their campaign is saying is that women lie about rape, about sexual assault to get back at a boyfriend,” said Karen Smith, executive director of the Sexual Assault Centre of Edmonton. She cited national statistics as evidence that false reports don’t actually happen as often as some people may think.

The same figure was also used by Acting Insp. Sean Armstrong of the Serious Crime Branch, which includes the Sexual Assault Section. Armstrong says that in the four and a half years he worked as a sexual assault detective, he came across only one false report.

“And I dealt with numerous files; many, many, many files. So they’re extremely rare.”

Read the rest of the article here…and read more on the myth of frequent false accusations here and here and here.

May you find peace.

Friends have send me screenshots of a conversation on FB yesterday. This is exactly the type of knee-jerk community response the OWF is trying to change.

I’ve said it on FB and I’ll say it again, anyone who mocks a group trying to create a safe place for survivors of sexualized violence is, at best, a crappy person. This particular person I had blocked weeks ago because of his misogynistic content. I see from these posts that it was a good decision. END_OF_DOCUMENT_TOKEN_TO_BE_REPLACED