Neutral Evil: The Problem With Refusing To Decide

“We must take sides. Neutrality helps the oppressor, never the victim. Silence encourages the tormentor, never the tormented. Sometimes we must interfere. When human lives are endangered, when human dignity is in jeopardy, national borders and sensitivities become irrelevant. Wherever men and women are persecuted because of their race, religion, or political views, that place must – at that moment – become the center of the universe.”

“If you are neutral in situations of injustice, you have chosen the side of the oppressor. If an elephant has its foot on the tail of a mouse, and you say that you are neutral, the mouse will not appreciate your neutrality.”

Bad men need nothing more to compass their ends, than that…

Must read article in The Atlantic.

In December 2012, an Icelandic woman named Thorlaug Agustsdottir discovered a Facebook group called “Men are better than women.” One image she found there, Thorlaug wrote to us this summer in an email, “was of a young woman naked chained to pipes or an oven in what looked like a concrete basement, all bruised and bloody. She looked with a horrible broken look at whoever was taking the pic of her curled up naked.” Thorlaug wrote an outraged post about it on her own Facebook page.

Before long, a user at “Men are better than women” posted an image of Thorlaug’s face, altered to appear bloody and bruised. Under the image, someone commented, “Women are like grass, they need to be beaten/cut regularly.” Another wrote: “You just need to be raped.” Thorlaug reported the image and comments to Facebook and requested that the site remove them.

“We reviewed the photo you reported,” came Facebook’s auto reply, “but found it does not violate Facebook’s Community Standards on hate speech, which includes posts or photos that attack a person based on their race, ethnicity, national origin, religion, sex, gender, sexual orientation, disability, or medical condition.”

Instead, the Facebook screeners labeled the content “Controversial Humor.” Thorlaug saw nothing funny about it. She worried the threats were real.

…that’s the least that should happen…

Jennifer Lawrence Does Not Owe Us

As people react to the Jennifer Lawrence Vanity Fair article that I blogged about yesterday, I’ve noticed a troubling theme.  People have not quite criticized her — I’m mostly talking about comment sections and social media and I’m not going to linkfarm that — for the sexually provocative photos that accompany the article, but sort […]

I agree. If you looked, you are complicit in a sex crime. Period.

Vanity Fair has an interview out wherein Jennifer Lawrence addresses the stolen nude photos.  She says that it was a sex crime, and she addressed the complicity of everyone who looks:

“Anybody who looked at those pictures, you’re perpetuating a sexual offense. You should cower with shame. Even people who I know and love say, ‘Oh, yeah, I looked at the pictures.’ I don’t want to get mad, but at the same time I’m thinking, I didn’t tell you that you could look at my naked body.”

Here’s how I look at it.  I imagine she was my neighbor, my friend, and she came and knocked on my door and told me that her account was hacked and someone might send me nude photos, and would I please delete them and not look at them.  Would I really look at them anyway?  No, I wouldn’t, and so I didn’t.  Some…

About Nungesser: The Man Emma Sulkowicz Reported For Rape

Yet another rape cover-up.
Surprise, surprise.

I already wrote about Emma Sulkowicz.  She reported a man to Columbia University for raping her, but the panel cleared him.  She went to the police, but they treated her poorly and did nothing.  Then she formulated a performance art piece, Carry That Weight, which has been widely covered and has received a great deal of support both within and without the university.

Her parents wrote a letter identifying the man she reported, and shedding significant additional light:  the same man, Jean-Paul Nungesser, was previously adjudicated responsible in an incident of violence sexual assault against a different female student, following her to her room and shoving her inside.  And Emma Sulkowics made her decision to report him after learning from other women about incidents indicating that his behavior was part of a pattern.  Here’s one thing they say:

3) The fact that Nungesser had previously been found “responsible”…

One of the unique elements, the Affirmative Consent standard, is set forth here, and it isn’t what some people seem to be assuming. The common rhetorical device is that affirmative consent requires some particular form of communication — notarized contract, filled out in triplicate, raised seal, etc. Far be it from me to criticize anyone whose kink is to have a bunch of suit-wearing functionaries watch their sexual encounters. De gustibus non disputandum est, which I think is Latin for “your kink is not my kink but your kink is okay.” However, the idea that that’s what the statute requires is just bullshit. It’s not in there.

Here’s the heart of it: ” “Affirmative consent” means affirmative, conscious, and voluntary agreement to engage in sexual activity. It is the responsibility of each person involved in the sexual activity to ensure that he or she has the affirmative consent of the other or others to engage in the sexual activity.” (Emphasis supplied.) It doesn’t say what form it has to take, or how one has to ascertain it. It doesn’t say anything about filling out a form, using an app, signing a waiver. It doesn’t even say you have to say any particular word. It doesn’t even require the word “Yes”! It just says that the absence of “no” isn’t necessarily yes, and it’s your responsibility, if you’re a student in a college in California, to make sure you have a yes. You can do that any way you like; it’s up to you how to see if you have a yes.

There are lots of ways to ask for a yes. If you lean in to kiss someone and they lean in to kiss you back, that’s yes. If you ask someone if they want your cock and they say, “I want your cock,” that’s yes, and if they put their mouth on it, that’s yes, too. If you’re fucking someone and holding them down and you’re both sweating and maybe bruised and you lean in and your hand is on their throat and you say, “can you still say no?” and they say, “yes,” that’s yes. We’re not kids here, right? We’ve all been there, and we know that people say yes, mean yes, shout yes and do yes in sex all the time. Those of us who don’t want to force anyone to do anything they are not into, don’t want or need sexual encounters where people are not doing yes as hard as they can.

Beware. If you are in an abusive relationship or have been in the past, take special precautions and check your personal devices to ensure the abusive party isn’t stalking you and continuing to terrorize you through the use of technology.

…there’s another kind of privacy concern that is a lot more intimate. You could call it Little Brother, though it’s really more like husbands and wives, lovers and exes who secretly watch their partners — from a distance. They are cyberstalking — using digital tools that are a lot cheaper than hiring a private detective.

NPR investigated these tools, also known as spyware, and spoke with domestic violence counselors and survivors around the country. We found that cyberstalking is now a standard part of domestic abuse in the U.S.

Digital Detox At The Shelter

Before we get into how spyware works, let’s visit a place that’s been transformed by it: a domestic violence shelter — a safe house for mostly women and children. It’s run by a group called Next Door, and it’s somewhere in the heart of Silicon Valley. I can’t tell you exactly where because its location is a secret. (I had to sign an agreement to be let in.)

While the kids are playing with dominoes in the living room, counselor Rosa Navarro takes the newest arrival — a woman who has a little boy — into a quiet office for intake.

And that intake includes digital detox.

Read more in the full article. 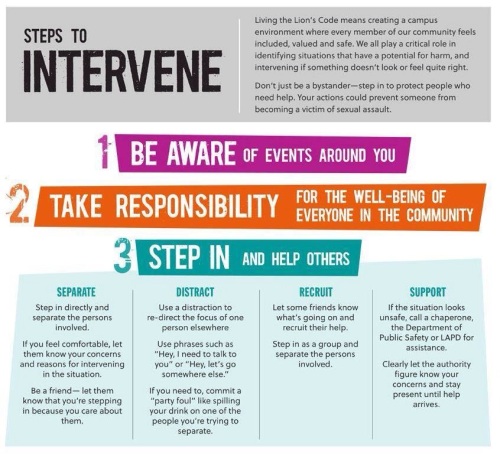 It’s Not Enough, But It’s a Great Start

Whereas I can see McEwan’s point that we’re shifting from victim blaming to bystander blaming, I do think that promoting bystander intervention is a positive step to put an end to rape culture and thereby an end to the prevalence of sexual assault.

Certainly the rapist is the only one ultimately responsible for their actions, for their choice violate another human being; however, peer pressure and a community unwilling to accept such misogynistic and aggressive behavior in the early stages will go a long way to deterring rapists.
Some of the arguments against bystander response is that it’s dangerous for the bystander, which I can see in extreme circumstances if physical violence is the case, but on the other hand, so much of this happens and perpetrators are supported way before the defining moment sexual assault.

Once we stop accepting misogynistic speech, rape jokes, and objectifying other human beings, once we put an end to the idea that one person is entitled sexually to another, once we firmly reject the notion that a woman was “asking for it,” and we do this with every action, word, and thought, that’s when rape culture will begin to end.

To change our culture, it is most certainly on us. #ItsOnUs

Read The Nation article to which I am referring, here.

The Order of the White Feather
Blog at WordPress.com.
Loading Comments...